-3.982
3M 12M Bollinger
Fri, Sep 30, 2022 Sell Candidate
* StockInvest.us uses dynamically calculated RSI max/min levels to determine when stock is oversold or overbought based on historical behavior.
RSI min/max Values: [ 25 - 75 ] RSI14 is 15 and the ETF is extremely oversold on RSI14, but some ETFS may continue to fall despite the high chance of a correction up. The low RSI lowers the general risk and the ETF should be considered if other technical requirements like liquidity and risk-reward are meet.
Last Reaction
Last Reaction

There are few to no technical positive signals at the moment. The SPY ETF holds sell signals from both short and long-term moving averages giving a more negative forecast for the stock. Also, there is a general sell signal from the relation between the two signals where the long-term average is above the short-term average. On corrections up, there will be some resistance from the lines at $365.77 and $396.90. A break-up above any of these levels will issue buy signals. A sell signal was issued from a pivot top point on Tuesday, August 16, 2022, and so far it has fallen -16.88%. Further fall is indicated until a new bottom pivot has been found. Furthermore, there is currently a sell signal from the 3 month Moving Average Convergence Divergence (MACD). Volume rose on falling prices yesterday. This may be an early warning and the ETF should be followed more closely.

This ETF has average movements during the day and with good trading volume, the risk is considered to be medium. During the last day, the ETF moved $8.87 between high and low, or 2.48%. For the last week, the ETF has had daily average volatility of 2.37%.

Our recommended stop-loss: We hold a negative evaluation for this stock. No stop-loss is set.

Trading Expectations For The Upcoming Trading Day Of Monday 3rd

With no support below and resistance from accumulated volume @ $10.77 (3.02%) our system find the risk reward not very attractive. 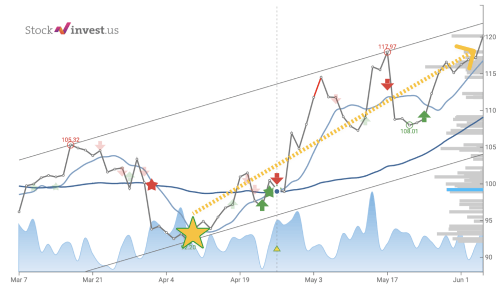 From 26 676 stocks, only a few dozen will trigger such a signal!
Get Access to The Golden Star!